The AutoGroundDesign package performs automated analyses of grounding (earthing) systems of any arbitrary perimeter and identifies an economical grid configuration complying with user-defined safety criteria that can be used as the design for grounding grids that are electrically small enough to be considered equipotential.

The AutoGroundDesign software package is the only fully automated software tool that can analyze and design grounding systems without the intervention of the user between various phases of the design.

This software package offers powerful and intelligent functions that help electrical engineers design safe horizontal, arbitrarily shaped grounding installations quickly and efficiently. A multiple-step approach is used for the automated grounding system design. A grid consisting of a buried metallic plate, which provides the lowest resistance, touch and step voltages, is used as a starting point to determine if safety limits can be achieved. If yes, a grounding system consisting of a minimum number of conductors is computed. From these results, a preliminary design is then selected based on the SES reference database, other intelligent rules, or as specified manually by the user. Next, the initial design is refined recursively using rule-based techniques and algorithms to improve its performance and satisfy safety constraints, while reducing the overall cost of the grid. Extensive collections of pre-defined grids have been analyzed and constructed. A strategy has been devised to quickly identify an appropriate grid, while at the same time minimizing the size of the database. The time devoted to designing a safe and cost-effective grounding grid is minimized by the use of these automation techniques and appropriate databases. 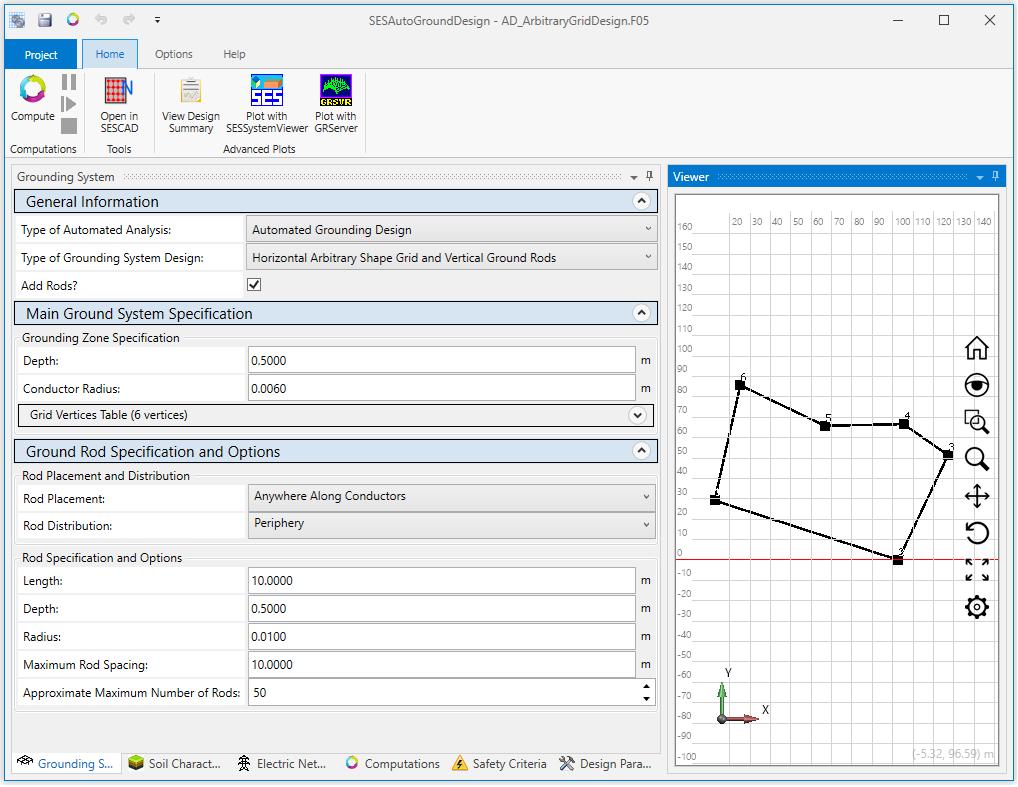 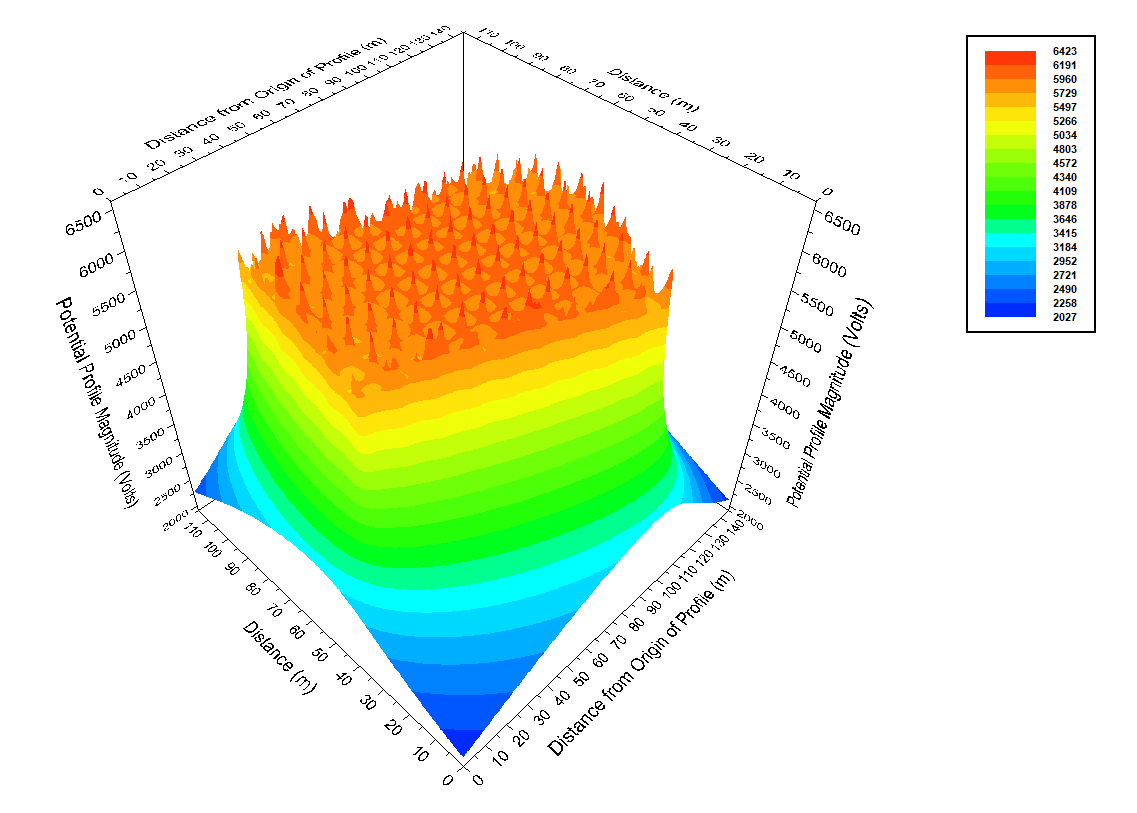 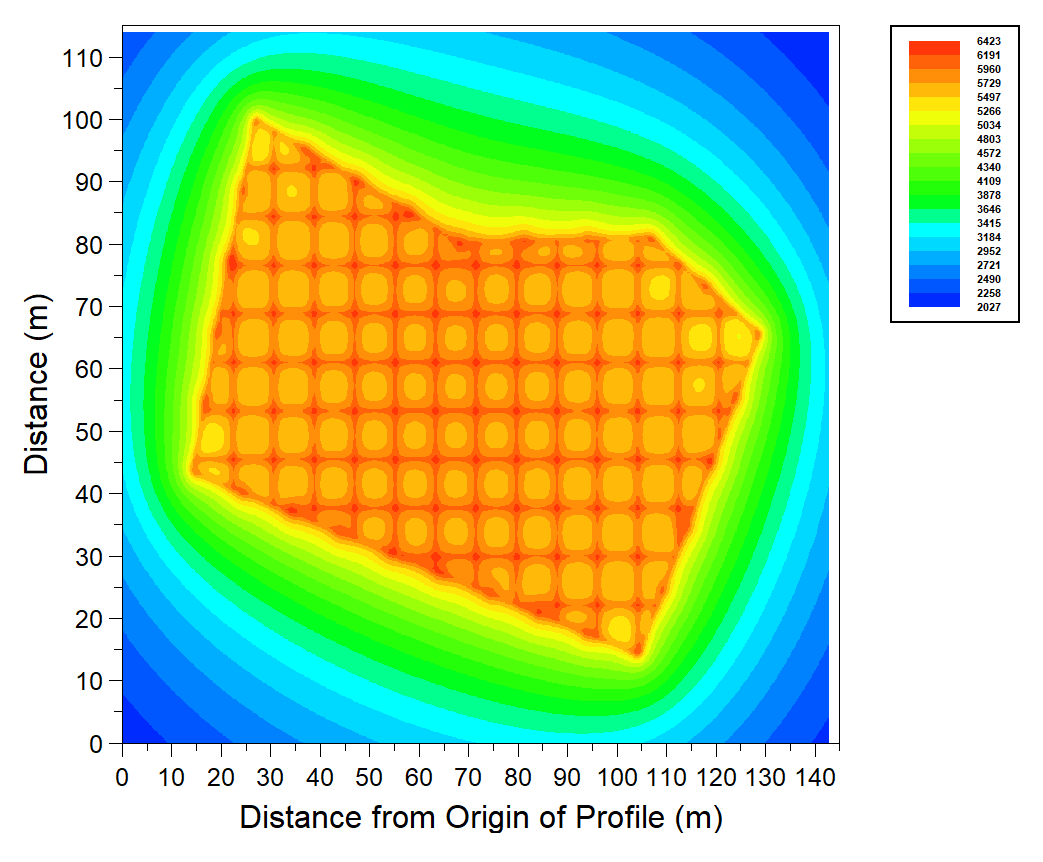 The component-based nature of this software package allows you to focus on your immediate needs, from the computation of the resistance of a simple grid to a complete safety analysis of the complex grounding system of a substation. Simply add more components as your needs evolve.

Brief descriptions of our AutoGroundDesign packages are provided below:

This package includes everything found in the Uniform Soil & Fault Current Distribution package, and adds the ability to model soil structures comprised of two horizontal layers. This package also comes with a resistivity measurement analysis module that converts measured data into a suitable soil model.

This package includes everything found in all preceding packages and adds the ability to model soil structures composed of any number of horizontal soil layers (multilayer soils).

A grounding system design requires several iterations before obtaining a safe configuration. Therefore, it can be quite time consuming. It is difficult to account for the large number of variables e.g., topology and dimensions of the grounding system, burial depth, type and characteristics of the soil structure and material used for the grid’s conductors (horizontal wires and grounding rods, etc.) that can affect the performance of the grounding system. The AutoGroundDesign specialized software package offers powerful and intelligent functions that help electrical engineers design safe grounding systems quickly and efficiently without the intervention of the user between various phases of the design. AutoGroundDesign takes into account the full complexity of the system with strategies and techniques that have been developed to allow the automated design to be applied to horizontal arbitrarily shaped grounding systems.

This is the ideal tool to examine, enhance and optimize a large number of existing substations that require updates due to increased fault levels or new safety standard requirements. It can also be used as the first step in a more complex design cycle requiring manual interventions.

The screen to draw or specify the vertices of any horizontal arbitrary grounding system is shown below: 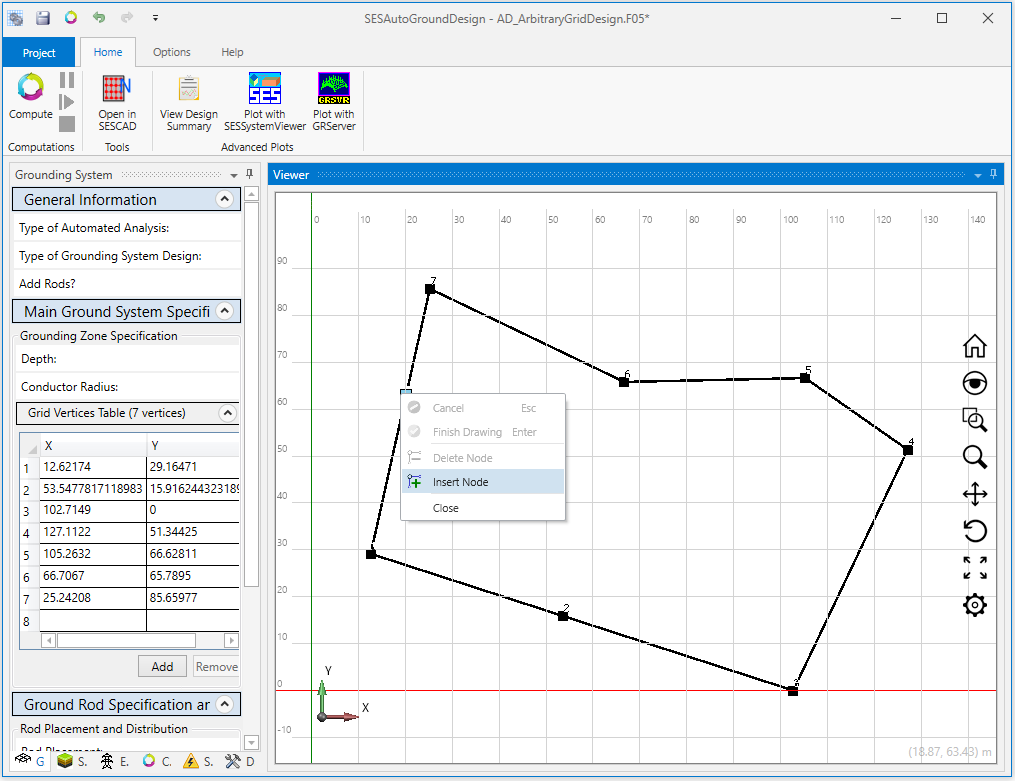 AutoGroundDesign has the following unique features. It: 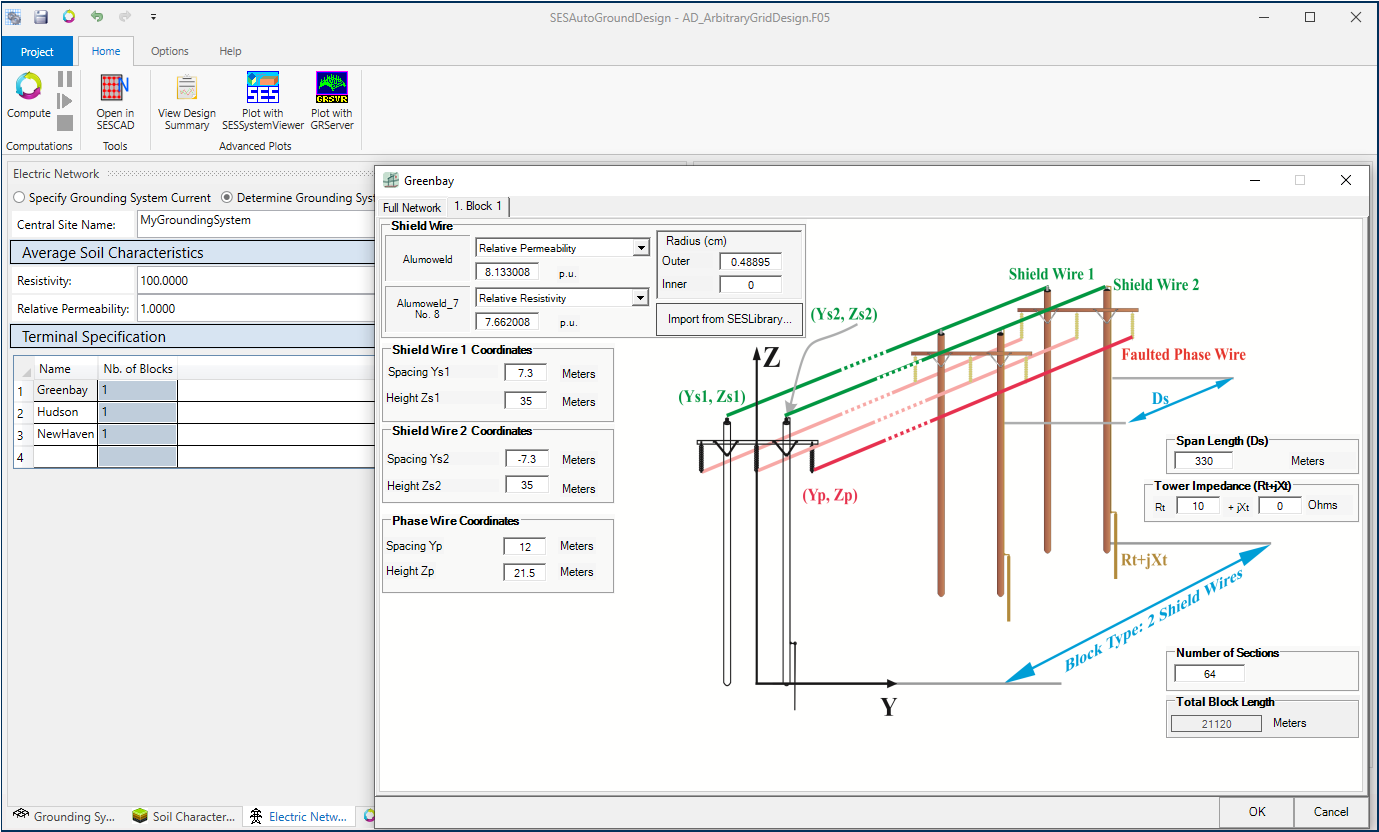 SES implemented the first automated grounding grid design software in the early 90’s. It had a character-based (DOS-based) menu interface and was called AutoGrid. It was restricted to rectangular grids buried in uniform or two-layer horizontal soils. Computation time was the main obstacle to the systematic use of this automated feature.

In 2004, SES developed the first version of a Windows-based specialized package called AutoGroundDesign. In the 2005 release of AutoGroundDesign, the soil resistivity measurement analysis, fault current distribution analysis and safety computation assessment modules were integrated into the AutoGroundDesign specialized package. A new iterative approach and improved observation point selection procedure, which resulted in faster computation times, were introduced into the package. Furthermore, metallic plates were introduced, as well as a robust and flexible grid and rod creation procedure, allowing for the specification of unequally spaced grids and rods. AutoGroundDesign, however, was still restricted to rectangular grids. Finally, in 2012, AutoGroundDesign was able to handle horizontal arbitrarily shaped grounding systems.

To produce an optimized design, better knowledge of the soil structure and the actual fault current flowing into the substation is needed. Also, a large number of factors such as the geometrical proportions of the grid, its depth, the type of grid conductors and whether or not grounding rods are attached to the grid are essential.

A multiple-step approach is used for the automated grounding system design.

The automated grounding system design software integrates the following modules and has the structure shown below:

This core and controlling module has a simple interface that allows users to establish an automated grounding system design quickly and efficiently. The ultimate objective of this module is to manage and coordinate input data, safety criteria and progress decisions in order to obtain a grid design meeting all requirements. The overall automated design parameters are controlled by this module to select the methodology used to obtain the initial design of the grounding systems, specify which grid database methodology is to be used for the automated design, and specify the maximum number of design iterations as well as the rate at which the design of the grid evolves.

This module is used to analyze power system ground networks subjected to AC or DC power frequency currents discharged into various soil structures. It computes the safety performance of the grounding grid, in terms of GPR, touch and step voltages.

This module is dedicated to the development of equivalent earth structure models based on measured soil resistivity data. It can generate models with horizontal multilayer soils.

This module calculates the fault current distribution in multiple terminals, transmission lines and distribution feeders using minimal information and a simple set of data concerning the network. It provides the actual fault current flowing into a grounding grid, as well as currents in the shield wires, tower structures and cable sheaths. Self and mutual impedances of the shield wires and cable sheaths are also computed and available.

This module generates safety threshold values based on IEEE Standard 80, IEC Standard 479, the user’s own standard, or a combination of these. The computed safety voltage limits are used to decide whether to stop or continue the design process. The parameters to determine the safety voltage limits are: fault clearing time, earth surface covering layer (e.g., crushed rock) resistivity and thickness, equivalent subsurface layer resistivity (this is the resistivity of the soil beneath the layer that covers the surface of the earth), body resistance, optionally specified foot resistance and resistance of protective wear, such as gloves or boots, and a fibrillation current threshold computation method.

A CAD-based module is used to view or edit (editing requires an AutoGrid Pro or AutoGround/MultiGround software package) three-dimensional grounding grids consisting of straight-line segments. The line segments represent either metallic conductors or observation profiles. They can be viewed from any direction, in a variety of ways. Another report and graphics module serves as a powerful output processor to display the computation results in various graphical or print formats. This module also has the capability to view the input data and even launch the grounding analysis module. 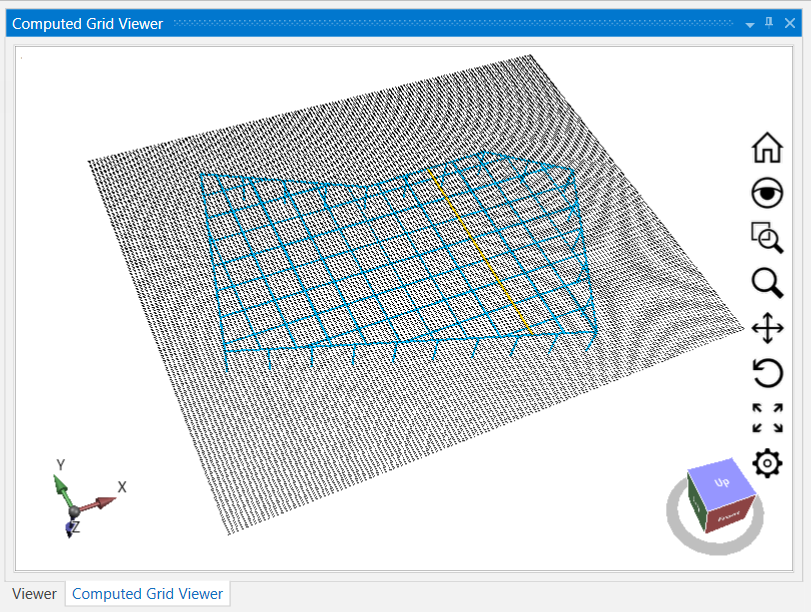 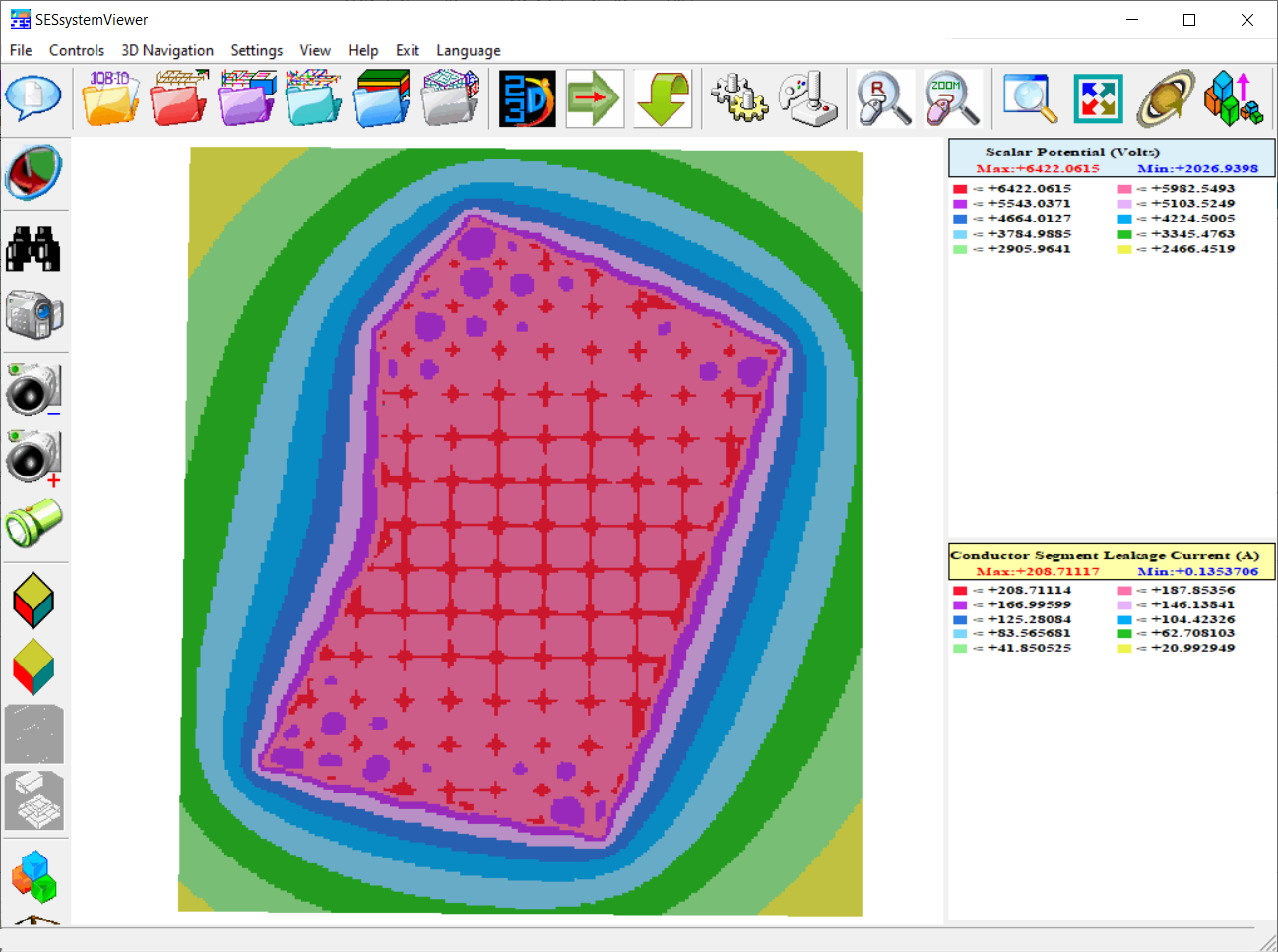 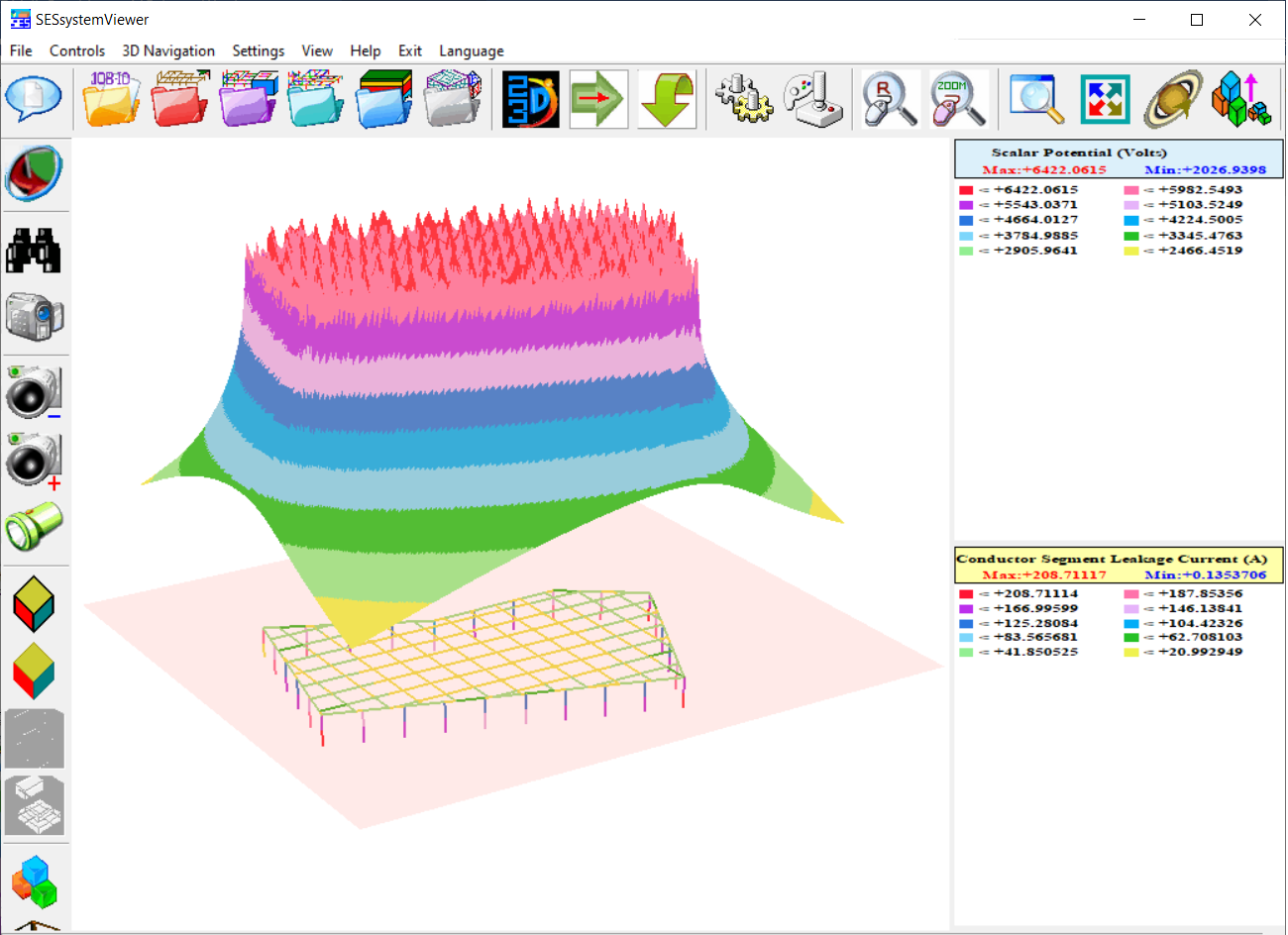